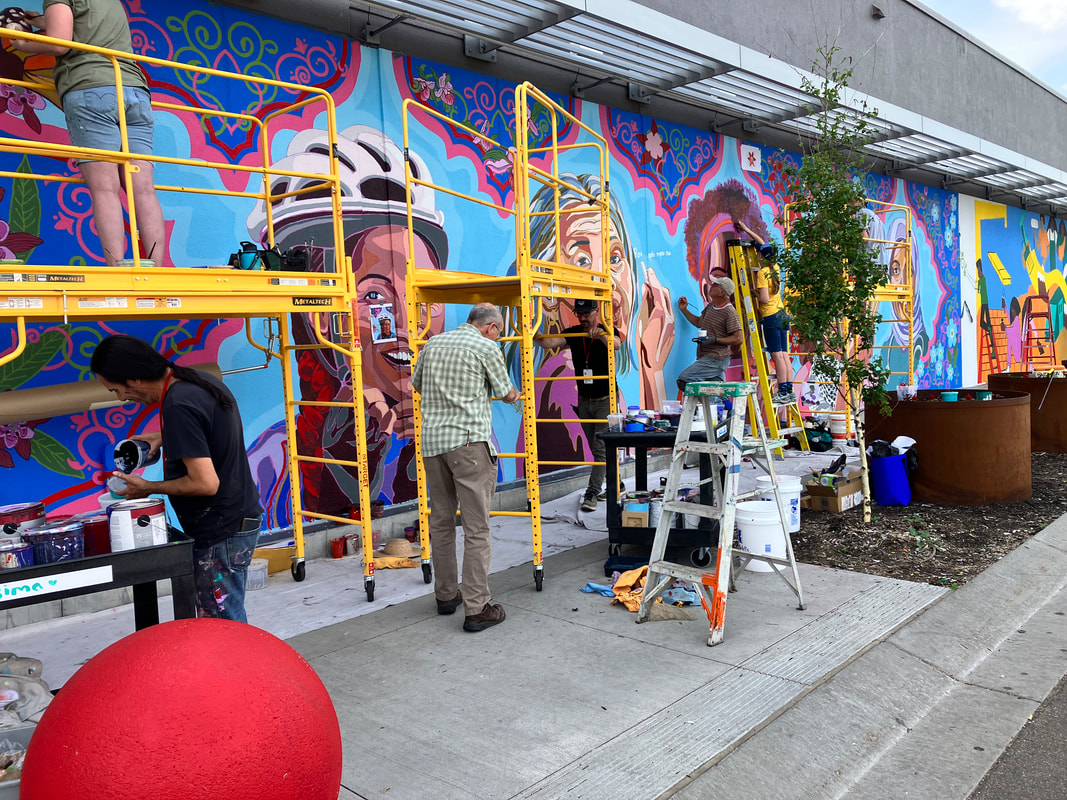 
I grew up where women were stripped of their power and forced to submit to patriarchy. I felt the injustice of that and rebelled against it, peacefully, by making art. When Target asked me to respond to the theme of “Healing” after the unrest that followed George Floyd murder, I thought of justice. The first step of healing our community is to restore justice. More 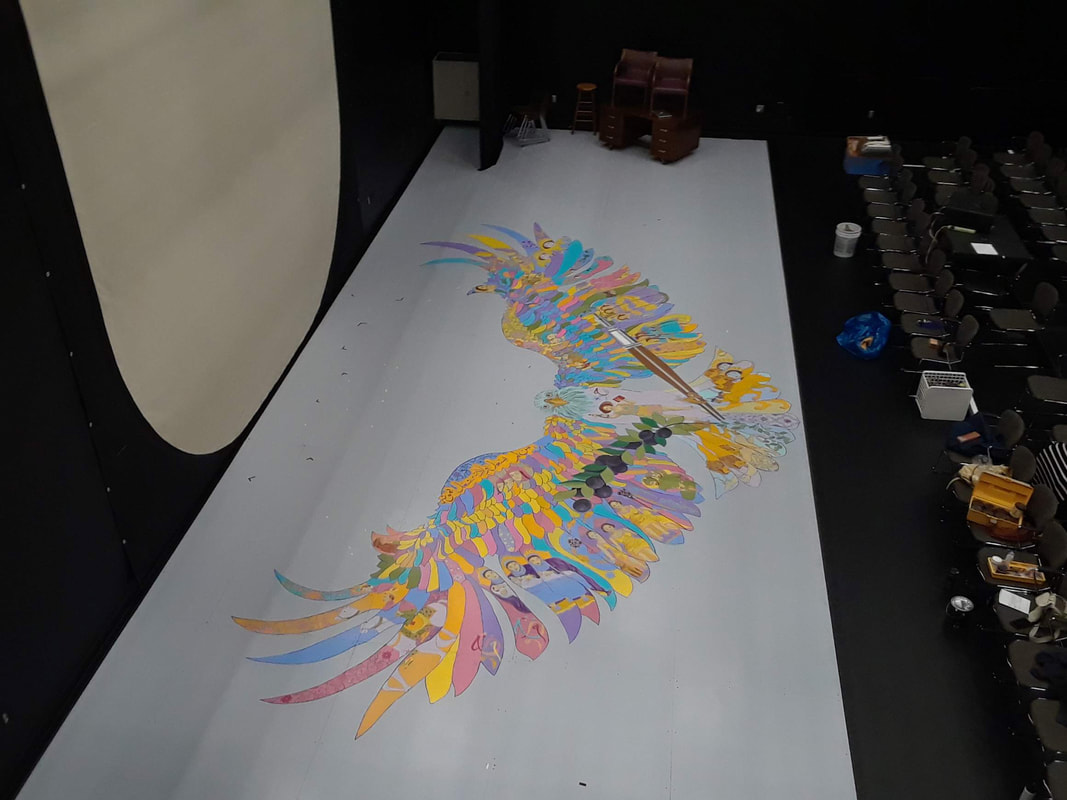 This is part of a set design for "Zafira and the Resistance" by New Arab American Theater that was on display at the Guthrie on October 2019.
It represents an eagle, a reference to the US, with feathers repetitively painted with Islamic art vignettes and parts of previous work.
Video with details. 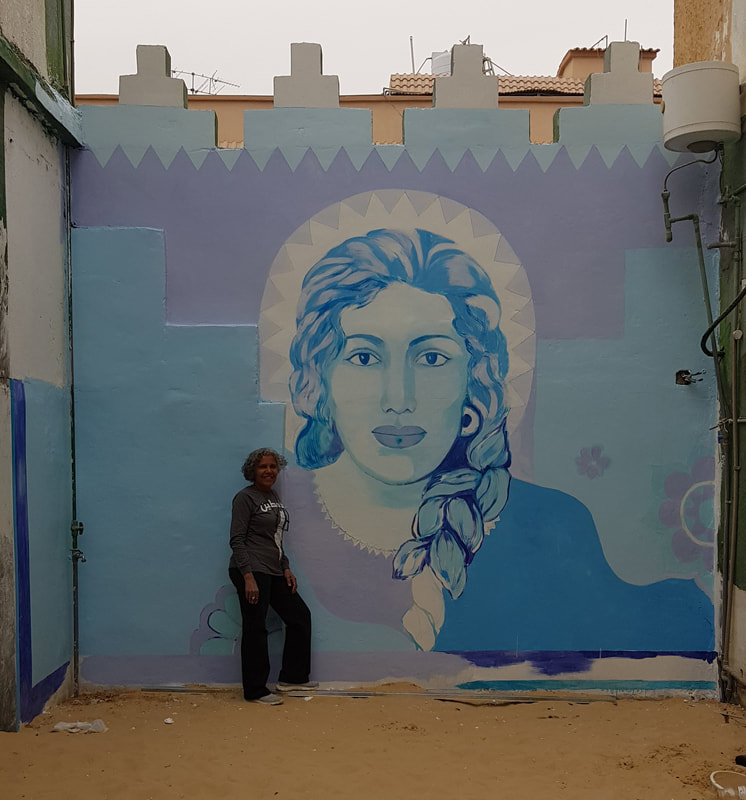 Work in progress of a mural represents a portrait of my young mother as a goddess. This was a response to an event in which some of my siblings renovated the house and erased a mural self-portrait that my mother made few years ago. Sad and helpless, I decided to make this portrait during a short visit to Saudi Arabia. 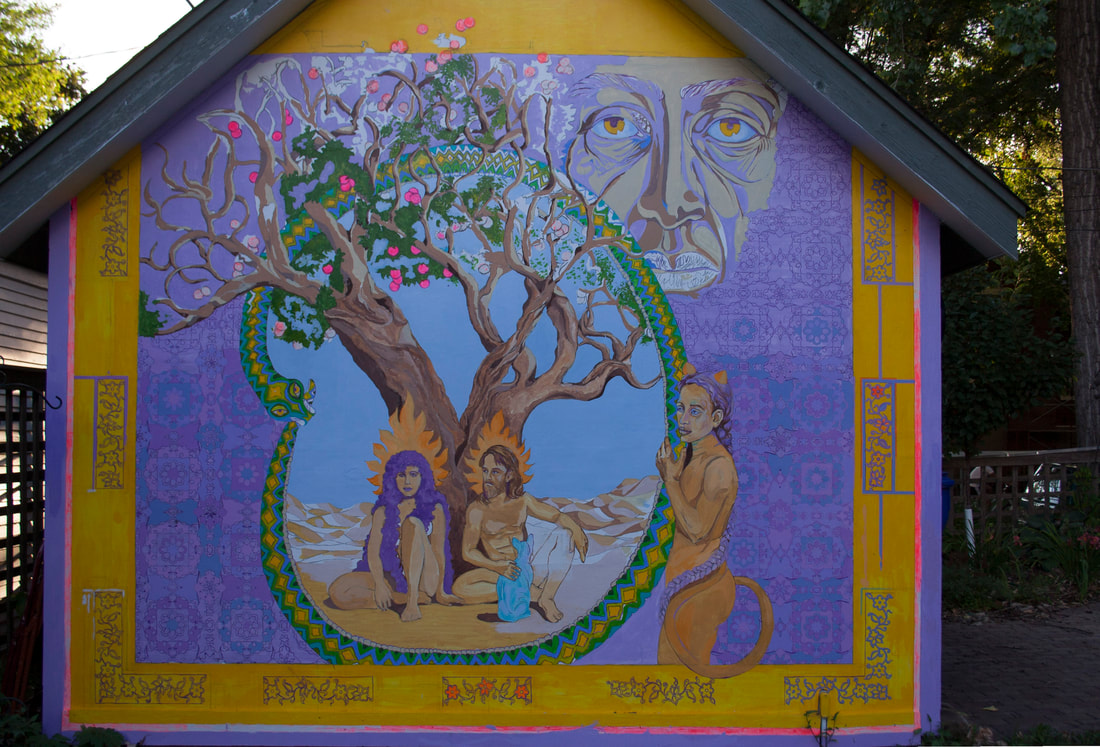 Eve
2017
The back of our garage was covered with wood siding. I covered that with plywood, painted it and smoothed it with wood filler and a lot of sanding.
At night I projected the drawing of my print "Eve" onto the finished wall and traced it with charcoal. I then painted it with acrylic and house paint. Unfortunately, i don't have a photo of the finished work. Now it is all chipped and peeled.  I think I should have sealed it with polyurethane or any kind of acrylic coating. 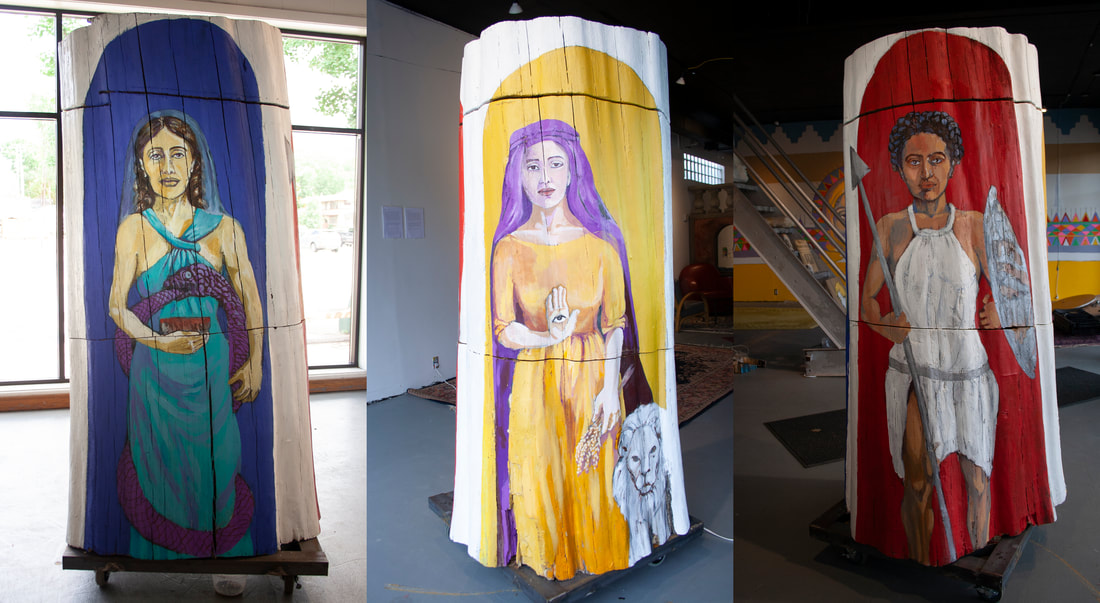 Three assembled photos around a tree stump
The 10 feet stump was a remnant of an old sick elm tree in Merriam Park neighborhood in St. Paul, MN. The three daughters of God are Al-Uzza, the warrior goddess, Allat, the fertility goddess, and Manat the goddess of fate. Five years after painting them the stump got infested with carpenter ants and had to be removed. Webb White, the owner of the Wacpac space offered to take them to his store front on Snelling avenue. After cutting and assembling the trunk, I repainted them 2017. 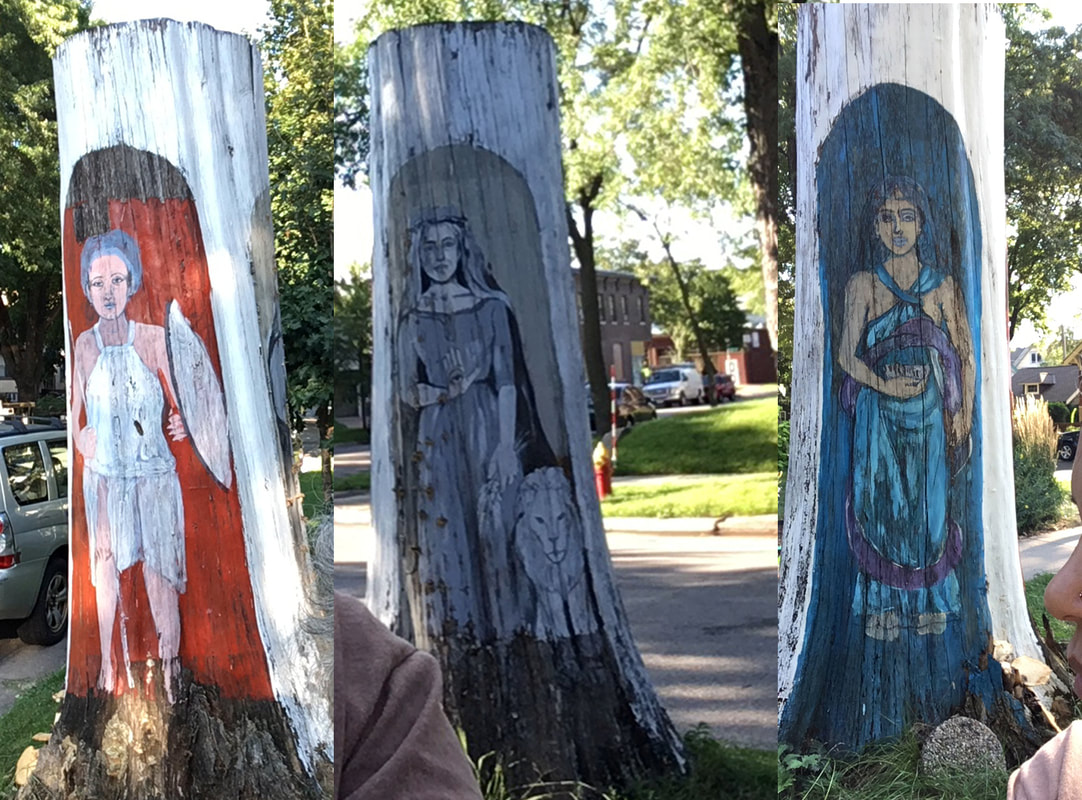 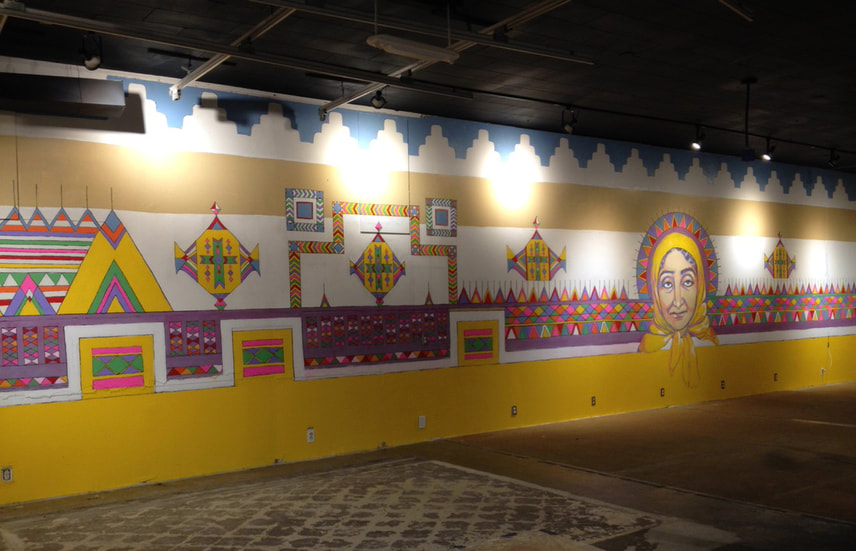 Homage to Fatmah Abu Gahas: The Last Master of Qutt
2015
49 x 12 feet - 15 x 3.6 meters
Inspired by her traditional art style, Qutt, the portrait of the late Fatmah Abu Gahas occupies the center of this indoor mural. Being indoor is also part of the Qutt tradition. 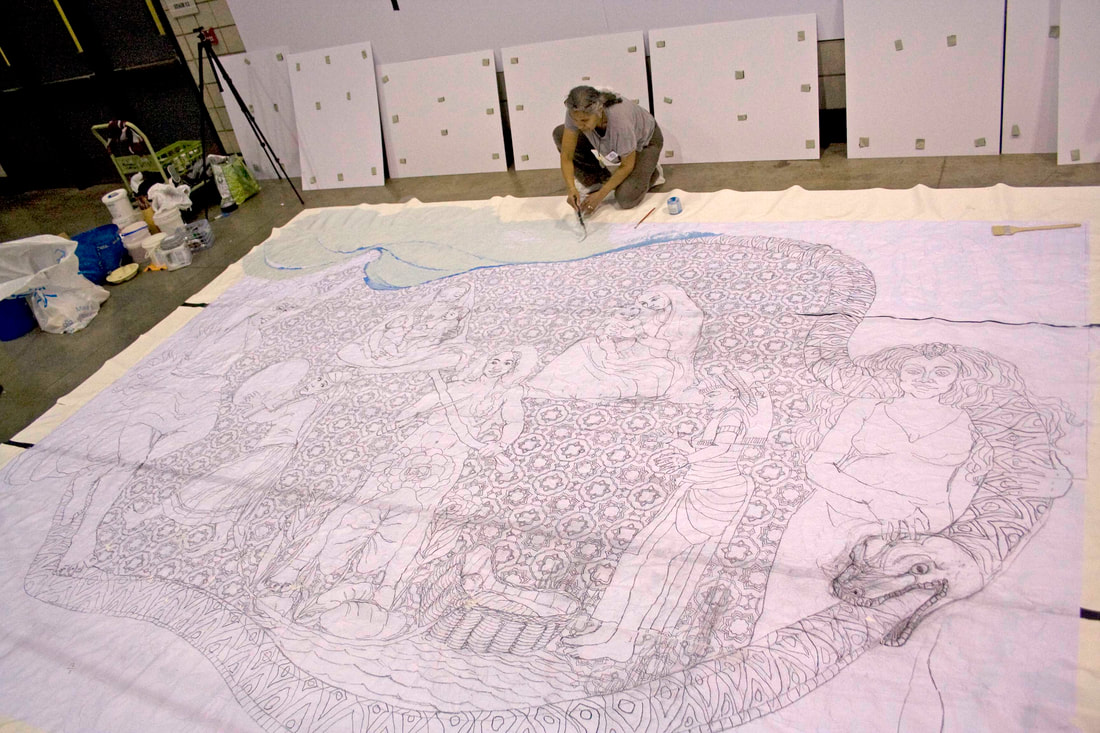 Drawn on canvas on the floor are female archetypal images embedded in geometric design. The canvas then was hanged on the wall and painted during the festival. 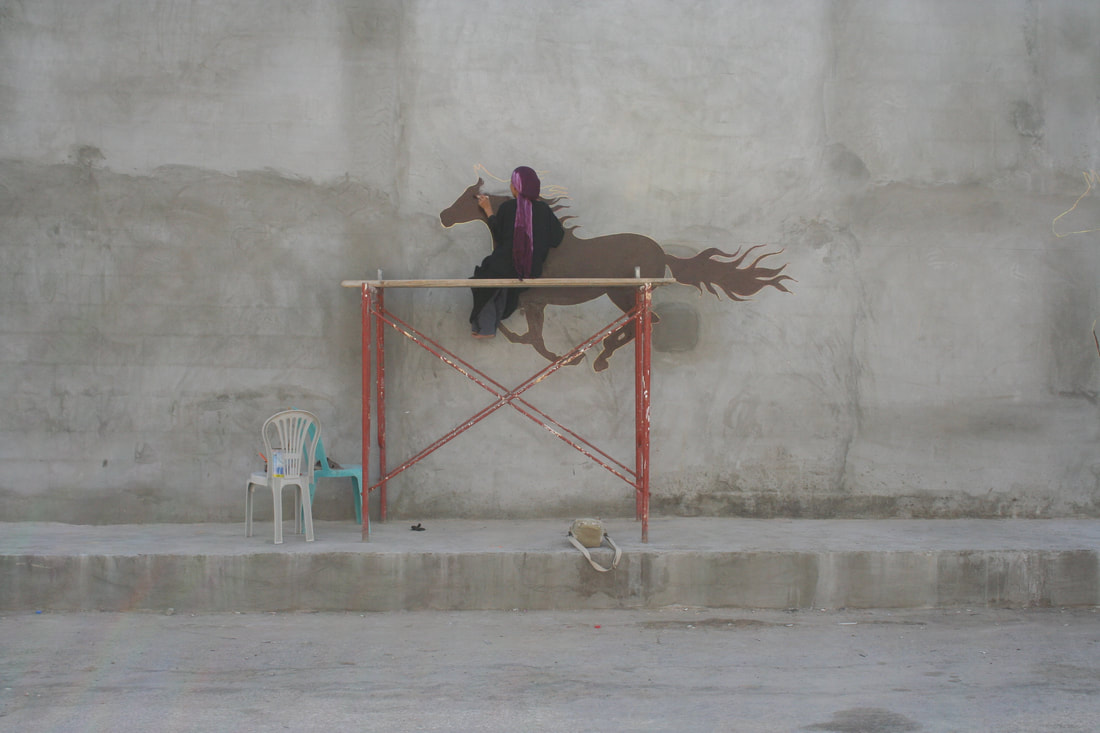 I painted a series of running horses around my mother's house fence in Al-Mubarraz, Saudi Arabia.
More images 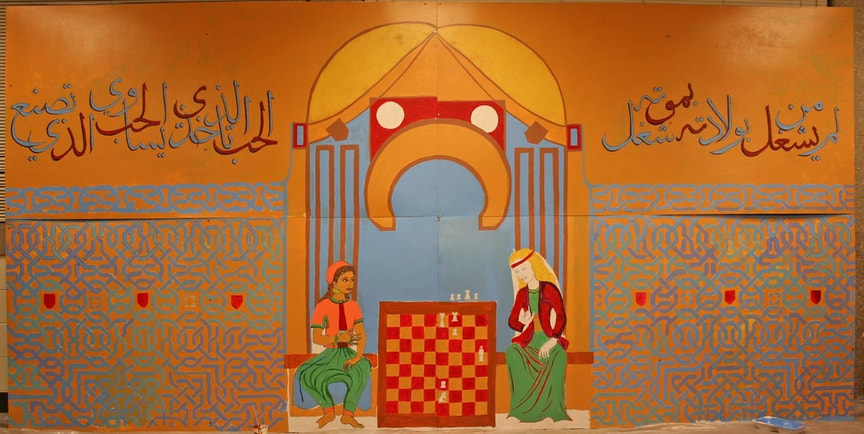